Look before you leap! by Dick Fraser

After 60+ years of rummaging through old ammo the value of exposing yourself to every opportunity to study potential variations continues to pay off. While going through an old collection recently acquired I came upon a bunch of inside primed .50-70’s and glanced at the bases to see if all was normal. One was an obvious misfire, destined for the 25 cent box. Or was it? 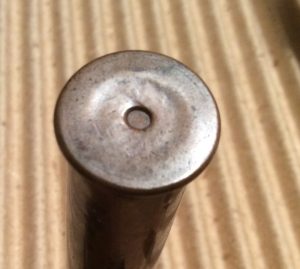 Well, looking at it more closely, the indentation in the base appeared to have perpendicular sides and flat bottom, not the tapered sides and rounded base of a firing pin mark. Having studied Berk Lewis’ book “Small Arms Ammunition at the International Exposition Philadelphia, 1876” I remembered that many of the Frankford Arsenal experimentals were based on the .50-70 case. So I went to the online version of the book at https://repository.si.edu/handle/10088/2410 and selected the hi-res pdf option.

Viewing the sketches on page 30, figure 43(318) looked promising. It was described as “318 Copper disk anvil in reinforcing cup, both held by two large stab crimps .125 from base. One of Col. Treadwell’s experiments with gas checks. The head has a .125 hole to increase sensitivity over the primer area. C-1.750. [Figure 43.]” Viewing a picture of the round on page 53 I was pretty much convinced that was what we had. That 25 cent misfire had now become a $300 FA experimental! So, study continuously, let your intuition be your guide and look before you leap.