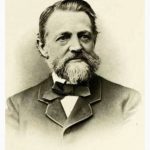 Marcellus Hartley was the son of Catherine Munson and merchant Robert Milham Hartley who was active in public health reform and the New York temperance movement. Hartley was educated in New York and entered his father’s business at the age of seventeen as a clerk. After three years he moved to Francis Tomes & Sons, Maiden Lane, New York, and became involved with gun sales. In 1854, at the age of twenty six, he started in business with partners Jacob Rutsen Schuyler and Malcolm Graham. They purchased goods in Europe and found a ready market in New York, with Hartley specializing in guns and ammunition. In 1857 a financial panic hit the country and many companies went under; the firm of Schuyler, Hartley and Graham survived and the following few years proved to be a boom period for them. In 1860, due to the threat of civil war, another panic hit the market. The company also had to defend itself in front of the grand jury when accusations were made against the partners of selling goods to the South.

As war approached it became apparent that there was a major shortfall in weaponry for the armies of the North, and procurement from across the Atlantic seemed the only answer. The Secretary of War sought advice on who could act on their behalf and the name of Marcellus Hartley was put forward. His knowledge of the industry and contacts in Europe made him the ideal candidate. For the purpose of his mission he was appointed to a status the equivalent of a brigadier-general and given access to an account at Baring Brothers. In addition to buying guns he was also instructed to block the sale of weapons to Confederate agents where ever possible…

From “Marcellus Hartley, a brief memoir”, his rather flowery life story, written upon his passing in 1902*

The Civil War had given Mr. Hartley exceptional opportunities to become acquainted with the manufacture of arms and ammunition all over the world. This experience was of inestimable value to him in succeeding years. Furthermore, his firm had been prosperous during the period, and the stimulus which the war gave to inventions and improvements in the manufacture of arms enabled him to employ his accumulated capital to great advantage. During the years that followed he acquired much wealth, but it was gained in a solid and steady way; for his fortunes were based entirely upon industrial success, and his enterprises were mainly the creation of his sagacity and sound judgment. Indeed his business career from beginning to end was an example of the conception, the building up, and the constant watching of substantial industries which gave to thousands of people regular employment, and made many families prosperous and successful. This expansion of his business has four main aspects.

The first of these was the opportunity afforded by the invention of the breech-loading rifle. Breech-loading rifles had been used early in the century, but until within a few years before the outbreak of the Civil War, without much success. The men in America to do most for the perfecting of these arms were perhaps the Remingtons, from whose works in the town of Ilion, New York, were turned out during the Civil War and in after years many rifles bearing the famous name. With the introduction of the breech-loading rifle arose the question of ammunition, and it was in the perfecting, not so much of the idea of the weapon, as of the facility, speed, regularity, and uniformity of production, that Mr. Hartley saw his first great opportunity to establish an excellent business. “There is no country,” he wrote to Anson Burlingame, February 8, 1866, “that can compete with us in breech-loading arms. It is now the universally acknowledged principle. This you know, and if they [the Chinese] are to have arms, they should have the most approved.” Indeed, he had had the idea of suitable ammunition long in mind; it had come to him as early as the year 1855, while a clerk in the employ of Tomes. When on one of his trips to the West, a chance acquaintance, learning that Mr. Hartley was interested in guns, showed him a roughly made metallic shell in which the charge for a gun could be inclosed. Mr. Hartley at once perceived the value of the idea, but, without expressing more than an ordinary interest in it, asked his fellow traveler to give him the shell. 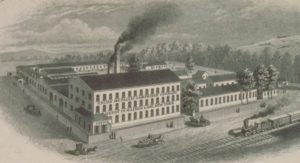 That souvenir led, some years later, to the establishment of the Union Metallic Cartridge Company, the most successful and profitable of the manufacturing interests in which Mr. Hartley was engaged. The idea both of the breech-loading rifle and of the metallic cartridge was, as has been said, an old one; Mr. Hartley’s contribution to the art of warfare consisted of the effectual and economical manufacture, on a large scale, of the first successful metallic cartridge ever made and adopted, practically, throughout the world.

Mr. Hartley could not put his idea into effect, however, until after the close of the Civil War. That plan his work for the United States Government prevented, and, moreover, it was the war itself, and the increased demand for arms after it, that gave him the opportunity that he desired. Then, on investigation, he found that only a few factories in the East had attempted the manufacture of metallic cartridges, but without success in any large or effectual way. Discouraged, they had finally abandoned their work, and had offered their plants and patents for sale. Of these the Crittenden and Tibbals Manufacturing Company of South Coventry, Connecticut, and that of C. D. Leet of Springfield, Massachusetts, 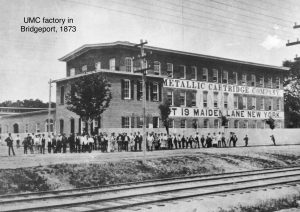 were bought by Mr. Hartley’s firm. The firm had, previously, in September, 1865, purchased a large tract of land, at Bridgeport, for the site of a plant, and on the ninth of August, 1867, incorporated the Union Metallic Cartridge Company under the laws of the State of Connecticut. This was the greatest of all Mr. Hartley’s enterprises.

The second enterprise of Mr. Hartley during this period was the establishment, in February, 1878, of the Bridgeport Gun Implement Company. Prior to that year appliances for sportsmen’s use, such as rods, cleaners, extractors, powder-measures, and reloading tools, had been made in this country only in small quantity. The varieties, too, were limited to the requirements of certain manufacturers of firearms, and consequently there was a considerable monopoly in the business. At that time, also, the sale of factory-loaded paper shot shells was a thing unknown, and the metal shells then used had to be recharged by sportsmen, as best they could, with a crude and clumsy yet expensive outfit imported from Europe. At this factory Mr.Hartley, as in the case of rifles, entered upon the manufacture of a line of goods that came into use with the passing of the old muzzle-loading shotgun. The business rapidly increased, more buildings became necessary, and the firm manufactured articles not only in firearms and shells, but in general sporting goods as well.

Closely connected with the Bridgeport Gun Implement Company was Mr. Hartley’s interest in electricity, which was then becoming known as an illuminant and source of power. Mr. Hartley was quick to foresee its possibilities and predicted its success. Desiring, however, to produce better apparatus than the dynamos then in use, and to make an incandescent lamp at once serviceable and cheap, he had a laboratory fitted up at the works in Bridgeport and employed Mr. Hiram Maxim, the well-known inventor, to experiment with dynamos and various forms of lamps, and the company itself took contracts for the manufacture of these commodities. Mr. Maxim was successful in producing an economical article, but had been slightly outstripped in the race by Mr. Edison. Encouraged, however, by the success of the experiment, Mr. Hartley determined to pursue the business considerably further. Having secured the patents of Mr. Maxim, Mr. Farmer, Mr. Weston, and other inventors, he determined to establish in New York a company to manufacture electrical apparatus and to build plants for the transmission of power. The company was organized with a capital of $300,000, which was subsequently increased to $1,500,000. Sub- companies of the United States Electric Lighting Company, as it was called, were also established in many of our large cities, and there seemed to be every prospect of success.

The opposition, however, arising from the skepticism of the public, the jealousy of rich gas companies, the competition of rivals, the heavy expenses incident to the introduction of all new enterprises, and much costly litigation for the defending of its patents, combined to retard the progress of the company. Mr. Hartley, though confident of ultimate success, thought best to sell the whole concern to Mr. George Westinghouse, who had recently established the Westinghouse Electric and Manufacturing Company, and interest in this Mr. Hartley’s company was merged. Mr. Hartley and his associates, however, retained their interest in the new corporation, and Mr. Hartley accepted the vice-presidency of it. The success of the company was phenomenal. Beyond this merely financial question, the success of Mr. Hartley’s work meant the practical demonstration of the superiority of the so-called alternating electric current system which, when first started by Mr. Hartley was bitterly opposed by other companies using the direct electric current system then in vogue.

Meanwhile, the original business of Mr. Hartley’s firm continued. The Civil War, as we have seen, helped it much. So, too, the Franco-Prussian War and the Russo-Turkish War brought additional business to it. That partnership was broken in the year 1875 by the retirement of Mr. Schuyler, and in 1899 by the death of Mr. Graham. No new members were added ; and the business in April, 1900, was incorporated under the name of the M. Hartley Company.

Such were the chief business interests of Mr. Hartley’s life. They showed admirably the various lines of work which occupied him. It was a life devoted to sound and epoch-making industrial enterprises; steady, stable, successful. 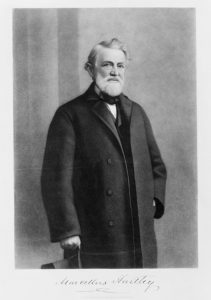 The last and perhaps the most conspicuous activity of any sort was the interest he took in the International Banking Corporation, of which he was president. This concern occupied much of his time and thought in the months preceding his death, which occurred on the afternoon of January 8, 1902. For a few days previous he had been complaining of indigestion, but, since his health had always been good and he had scarcely ever been confined at home, he thought little of the matter. On the morning of the sad occurrence he left his house in his usual cheerful humor and drove to his office, where he was engaged during the morning. Then he attended a meeting of the Executive Committee of the Equitable Life Assurance Society, took lunch, and afterwards went to a meeting of the Executive Committee of the American Surety Company. His colleagues were seated about the long table of the room. With them he chatted gaily for a moment, but presently became silent. It was then noticed that his head was drooping lower and lower on his chest. To a question whether he felt faint he could make no reply; his head fell forward, and in an instant, with the arms of Mr. Smith about him and his hand clasped in Mr. Wheelock’s, surrounded by friends and business associates, Marcellus Hartley passed away.