A Random Encounter With History by Stephen King 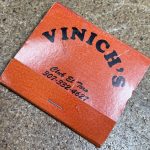 I recently attended an auction at CT Firearms Auctions in Berlin, CT and won a lot that included this matchbook. On the surface one might just pass this by, but I was curious and upon opening the matchbook I found the the following handwritten note which read: 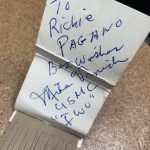 What struck me was the letters “USMC” which indicated Marine Corps and I suspected the “IWO” reference might have something to do with the Island of Iwo Jima. Well it did not take long and a quick Google search led me to a hero of the greatest generation who deserves recognition for the contribution of his efforts during one of the most grueling battles of the WWII.

Platoon Sgt. Mike Vinich was a WWII veteran of the South Pacific campaign and amazingly enough, an 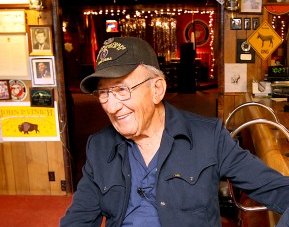 acquaintance of John F. Kennedy who had saved his life. On the island of Choiseul, Vinich and his men totaling 600 Marines were outgunned by some 20,000 Japanese troops. “For seven days the Marines hit and ran, working the defensive until water spread between them. In the nick of time, Navy PT boats arrived to rescue the American troops”. Vinich happened to scramble on to PT-109, the boat commanded by Lt. John F. Kennedy.

Mike Vinich passed away on November 16, 2015. Although I never met the man, I am honored to have encountered a small piece of history that has provided me the opportunity to tell his story to the members of the guild. This is what we do, why we do what we do, and what makes what we do worth while.To me, this was the most valuable piece in the entire lot and I am not only honored to have it, but proud to be the caretaker who will pass this small piece of history and it’s story along to future generations.

Here is a video of Platoon Sgt. Mike Vinich three months before his passing describing his experiences in his own words: