Starting on page 61 of R.L Wilson’s monumental book, RUGER & HIS GUNS is a wonderful story of the development of the Ruger Deerstalker as told by gun designer and former YCGG president Harry Sefried. The Deerstalker was later renamed the Ruger Carbine. Harry’s tale is several pages long, be sure to read the parts before and after the excerpt we have selected for this article.
The experimental cartridges that Harry cites in his story have not been lost to posterity; indeed, they are intact and reside in an extensive private cartridge collection in New England.
We thought that that the members would enjoy learning about this obscure bit of Ruger lore so, here on these pages we have a collective of three elements; Harry Sefried’s wonderful story, plus a summary from the custodian of the cartridges and finally photos of the “hotter cartridges” described in both accounts.
As told by Harry; from RUGER & HIS GUNS;
A few years later, we decided it would be nice to have a hotter cartridge for the .44 Magnum Carbine. Bill asked me to look into that; so I necked down the .44 into a .357 bullet, into something you could fit into a Model 1892 Winchester. This special cartridge (called the “38-44 Magnum”) was something very similar to the old .38-40. It could be loaded a little hotter, but we didn’t have enough cartridge case capacity to do anything spectacular. We ended up making two special cartridges, one chambered in a .44 cartridge necked down to .357, and the other a .44 necked down to .40 caliber (to take a .38-40 bullet, which is actually .40 caliber). For the case, I took the brass from a .45-70, and cut the rim off in a lathe, turning it down to be compatible with the .44 magnum rim diameter, so I could use the same bolt, extractor and everything else, though it had a bigger chamber by quite a bit.
We found the .40’s energy above and beyond the .30-30 Winchester. Bill and I went to a meeting with the fellows from Winchester-Olin, and we tried to get them to manufacture the cartridge. I was using Hercules 2400 powder, and about 100 percent filling the case, which gave us reasonable pressures and beautiful energy. It had the advantage that you couldn’t overload it with 2400.
They decided they couldn’t possibly load it to that capacity, and would have to do only 90 percent, which would make it less powerful than the .30-30. Bill, Jr. took a Bighorn Sheep with either the special .357 0r .40 cartridge. The hot one was the .40 caliber. We were on the verge of something very spectacular, but Winchester didn’t want to compete with their own .30-30.
Summary from the conservator;
Gun designer Harry Sefried worked closely with Bill Ruger in the 1960-1980 time period. Some of his work includes the Hawkeye, the Security Six and Redhawk stainless revolvers, Mini14, 10/22 rotary magazine and the .44 Magnum Carbine. I became friends with him the few years before he died in 2005 and learned much about the art and technology of gun design. As a cartridge collector I was also quite interested in the design work he did on rounds to increase the power of the Carbine.
The mechanism required a round of about .44 Magnum length and case diameter. Initial work used .44 Magnum cases necked to .40 and .357. Getting rid of the rim allowed for a fatter case body, initially based on the .284 Winchester case, and then the .45-70 with the rim reduced to a groove, again necked to .40 and .357. They were pleased with the .40/.45-70 design and approached Winchester to load it for them commercially. Winchester declined, ostensibly on the grounds that the case would have to be powder filled beyond acceptable limits. Harry felt it was because the new round was more powerful than the old Winchester standby .30-30 and would threaten their market with the deer hunters.
Harry was also experimenting with a round for a box magazine fed version of the Carbine. Remington’s Mike Walker designed a .30 caliber round for him on a shortened .300 Savage case (same head diameter as the .30-06, .308 Winchester, etc.) with about the same overall length as the .44 Magnum. He was running them through a Winchester Model 1910 magazine in .401 Self Loading size.
Nothing ever came of the Carbine enhancement project, and it all ended up in his overflowing basement where I discovered it one day.
Harry was always going to find his notes on the project so we could do a more precise write up, but that never happened. Just one funny story (of which Harry was full of) involving the Carbine, Bill Ruger and a porcupine overhead in a tree. They were looking for some poor animal to test it out on and Bill told Harry to shoot it, while he stood underneath to watch the effect. The porcupine exploded showering Bill with all kinds of unsavory parts and pieces, much to his extreme displeasure. Harry laughed himself silly.

Photos of the experimental cartridges; 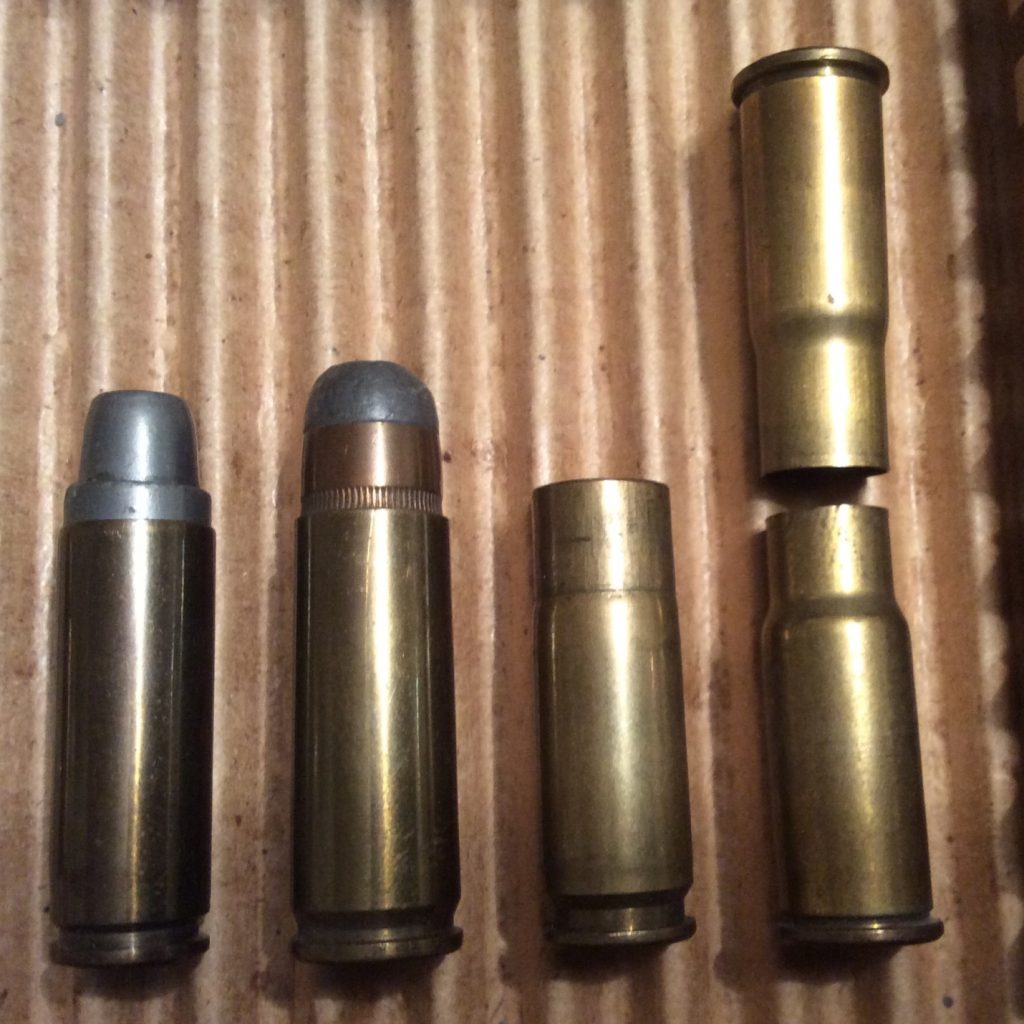 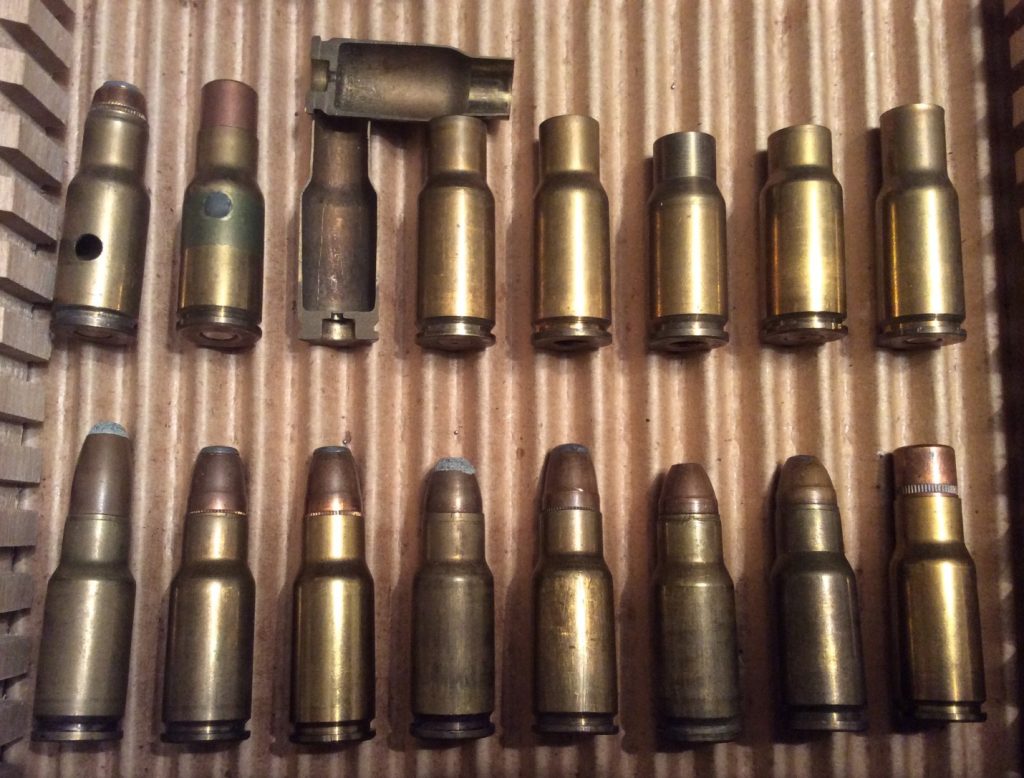 Pressure test, cutaway cases, unloaded and various bullet types loaded in the .357/45-70 with the rim removed and an extraction groove added. 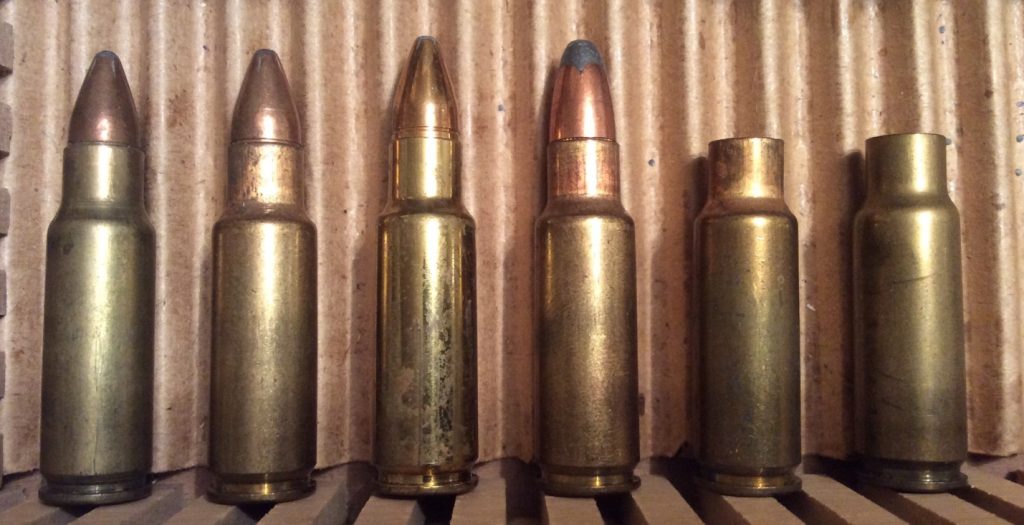 Short .300 on various cases, Harry said round was developed by Remington’s Mike Walker for use in clip fed mag for the Carbine, Harry was using a magazine from the Winchester .401 Self Loader for his experiments. 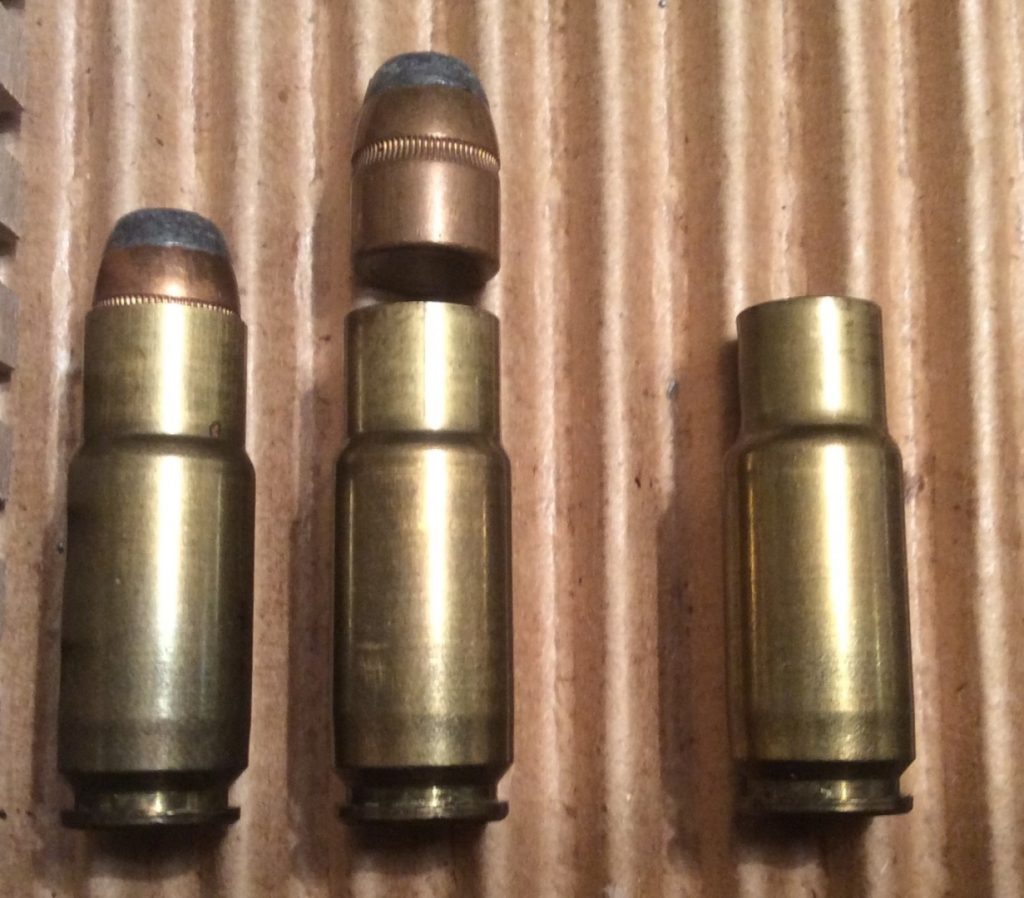