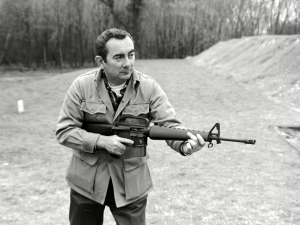 Rob Roy, gun inventor and designer, came to work for Colt about 1960. He had been involved with them for several years while Colt was transitioning the production of a .22 semi-automatic rifle of his design from Kodiak/Jefferson, and Rob ended up coming along with the guns.

His fertile mind, perhaps triggered by previous work undertaken at Colt in earlier days, took him and Colt into several interesting places. One was an improved pistol cartridge, the .400 Colt Magnum. It was developed for use in the Colt Official Police size revolver (based, perhaps, on similar work Rob discovered Colt had done in the early 1930’s). The new cartridge and its chambering in modified OP’s was close to production when Smith & Wesson announced their .41 Magnum, which blew away any marketing potential for the Colt .400.

A more significant contribution of Rob’s was the idea for an improved military pistol. With Viet Nam and the M16 project, Colt had become intimately involved with the US military. The military had a keen desire to see a more modern pistol than the 1911A1 Government Model which Colt was then constantly refurbishing to the tune of several thousand at a time. Rob’s knowledge of worldwide pistol design and access to Colt experimental work, especially Colt’s experimental T4 gun of the late 1940’s, led him to propose his new design. 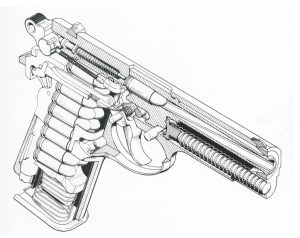 This new design would feature the use of Stainless Steel (the early guns were referred to as the SSP for Stainless Steel Pistol), higher capacity Browning High Power style magazine in the more popular military caliber 9mm Parabellum, double action mechanism, and simple takedown requiring no tools and with no parts under tension (how many of us have launched a recoil spring plug or firing pin in the process of disassembling a 1911). Some ideas, especially the DA mechanism, are clearly taken from the earlier T4. 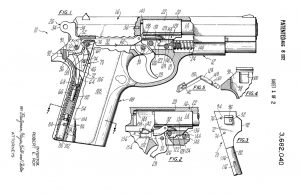 Rob’s most significant contribution to the new design was the “En Bloc Fire Control Group” which held the hammer, mainspring, sear and sear spring together as one unit, easily removed from the pistol for cleaning and maintenance. In 1969, he and Colt apply for a patent on this concept, and in 1972 U S Patent number 3,682,040 is awarded to them.

The gun was formally introduced to the US Government in Colt’s Technical Report No. 850-2086 of December, 1970, entitled “Colt’s Concepts for a Personal Defense Weapon”. In this report and subsequent documents the gun is now referred to as the “Model 1971” in various ways (Military Pistol Model 1971, Model 1971 Double Action Pistol, etc.). It continues refinement and is entered into US Government trials as the XM9 9mm semi automatic pistol (which trials result in the Beretta being adopted as the new US military sidearm). 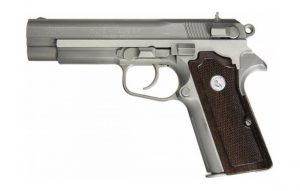 While the SSP/Model 1971/XM9’s ruggedness (which comes with attendant bulk and weight) is appreciated by the military, this is not the case with the police and civilian market who prefer the Glock and similar guns taking advantage of polymers and lightweight metals. Colt finally enters the double action market with the Double Eagle which uses stainless steel and many parts in common with the older Government Model. When that fails to attract the fancy of the shooting public they tool up for Reid Knight’s invention which they call the All-American. This bombs even worse as it won’t work reliably when heavily lubricated.

Crippled by these, and many other management failures, Colt reverts to 1911-based models for its livelihood and still lurks there as the industry passes it by. After fifty years since the first prototypes, the SSP is no longer a viable contender in any market and is relegated to history.

Thanks to Dick Fraser for providing this information